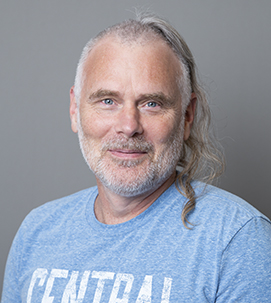 Ben Evans is originally from Lewiston, Idaho. He has worked at CWC for more than 20 years. Before working at CWC, Evans was a graduate assistant in composition instruction at the University of Idaho. He was a writing lab tutor at Eastern Washington University and later a full-time ESL instructor for the Intensive English Institute.

Evans was an adjunct instructor for English and literature at Eastern Oregon University. During his time teaching, Evans has also been in more than five bands, where he was a drummer, lead vocalist and played the rhythm guitar. He has also done some songwriting in his time earning credits on two rock albums in 2018 and 2020 for songs "Hard to be Free and "Yes It is."

He has also organized and presented multiple poetry readings. Evans also has a passion for natural food and has taught vegan and natural food lifestyles and cooking methods. He practices and researches Tibetan Buddhism.

During his time at CWC, Evans was also an adjunct instructor at Wind River Tribal College.

Evans believes CWC is a location and culture with a soul.

"I've heard many people say this, in one way or another, and I agree with it. This place is touched with a bit of magic when it comes to helping people in general as well as in particular academically and/or vocationally. A "place of possibility" would also be a kindred phrase; CWC is likely to have a high percentage of deeply and authentically caring people compared with other institutions/businesses of equal size. If there is such a thing as a "spirit of education" I think CWC embodies that pretty well. The basis of this, I do believe, goes as deep as the land, which I more or less consider as the greater Wind River Valley and adjacent lands. I've often said that this "Rendezvous Spirit" lingers--it's real and not merely a mythology. That is, I think people around here can, if they try, catch a kind of spirit of multicultural celebration and generative multicultural force which has the power to actually evolve the local paradigms by which families and communities live. The local historical Rendezvous are likely to have proven this power in their times."

Evans said he loves that students learning in his subject areas engage with their process as an ongoing conversation, a dialogue, complete with the elements of what he calls the "live story" of their learning. Students here often show that they're carrying their critical contemplation well outside classrooms, and applying that as much as possible to their lives. For example, when in the study of literature or creative writing a student comes to realize that "story" has enough power to cause a young person to go to Iraq and risk life fighting for freedom, or when it dawns another student that stories and storytelling have more than a peripheral application to, say, many of the intelligence operations of Mossad, or when a student sees that advertising thoroughly makes use of elements of narrative, these moments of realization and resonance do excite and evolve students' understanding of themselves and the possibly malleable realities in which they live.

"I love to see a student's expansion and clarification on how practically beneficial can be serious treatment of the various powers of language."