CWC bids farewell to its 2019 retirees

After 23 years with CWC Kathy Vincent retired in January 2019 as the Director of College and Career Readiness, a position she had since 2002. She started her career at CWC as a registrar technician for Registration and Records.

“We called ourselves the jerky clerks after a man who was angry with us called us the ‘jerky clerk,’” Vincent said.

After working for about two years, Vincent took some time off to raise a family. She came back in September of 1995 as a student tutor and later became an instructor for ABE/GED. In 1999 she was the ABE/GED coordinator before taking the role as director.

Throughout her career, she was the chief examiner for the CWC testing sites in conjunction with Lander, Fort Washakie, Dubois and Jackson. While employed at CWC she was recognized in the 2015-16 year as the Outstanding Professional staff and nominated in 2019 by Wyoming Lifelong Learning Association for the Mountain Plains Adult Education Association award.

Vincent earned a Bachelor of Arts in Psychology from Creighton University in 1970. In her retirement, she plans to read and said it would be nice to travel. She has three children that live nearby.

“It’s been great,” Vincent said about working at CWC. “There are nice people here and really great students. I will miss the students and the people that I work with.”

Many have said that she was a great advocate for the students as well as staff with her door always open to listen and was open to ideas, suggestions, and areas of concern. Kathy retired on January 31, 2019, after 23 years with the college.

Dudley Cole, professor of automotive retired in May after more than 19 years with CWC. After taking a motorcycle ride in the fall to Wyoming, Cole said he knew he had to live here. That trip in the 70s brought Cole to Riverton and he has lived in the area for about 38 years.

Cole who is from Michigan also spent time in Illinois before moving to Wyoming.

He started his career in July 2000 as an automotive/welding instructor and then became a business vocational instructor in August. In September of 2001 he became an instructor of automotive technologies. During his time at CWC he also served as a Gear Up Academic Coach for awhile.

Additionally, Cole received his Bachelor of Science in Education-Industrial Technologies from Northern Illinois University. Beyond his degrees, he has several certifications such as a Master Certified Automotive Technician, American Welding Society Certified Welder and Inspector, and an Automotive Service Excellence Master Technician.

In 2006 Cole was nominated, in conjunction with several others, for the Rustler Salute Award.

“The college is a good place and was a good fit,” Cole said of his time working at CWC.

This is one of the best places I’ve worked. There are wonderful people here and we all have a common goal to help students and we need to celebrate what we have done. It’s so wonderful. ”

In his retirement, Cole plans to work on projects around his house in the country. He also said he has some business interests that he will work on.

“I traveled a lot when I was young so I plan to stay in the state,” Cole said. 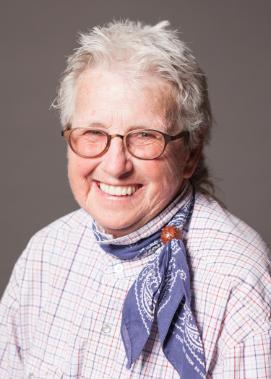 Lynda German started her career as a temporary worker at the Field Stations in January 2007. From there she was moved to building maintenance at the Lander Center in January 2008 while also being the field station attendant.

German was nominated for the Rustler Salute Award in October 2010 by Ken Colovich for her dependability, “can do”/caring attitude and outstanding customer service. In December 2019 she won the Rustler Spirit Award. After almost 12 years of service, German retired as the facilities attendant for the Alpine Science Center/Grounds for Lander on December 2018.

“I would like to take this opportunity to thank all of you at Central Wyoming College for making the past 10 years such a wonderful work experience for me,” German said. “I will certainly miss all the students and all those of you I have come to call my friend. Be safe, work hard and stay proud of what you have accomplished as part of CWC.”

Jim Baker started his career as the welding lab supervisor on August 21, 2006. In 1977 he was honorably discharged from the United States Army. In 1992 he attended CWC to earn his GED  and from there received an Associate's of Applied Science in Welding in May of 2009. Jim was nominated for the Rustler Salute Award, by Bill Hitt, Mike Donelson, and Kyle Johnson in March 2009 for going beyond the call of duty. Jim retired on September 30, 2018 after twelve years as the Welding Lab Supervisor. 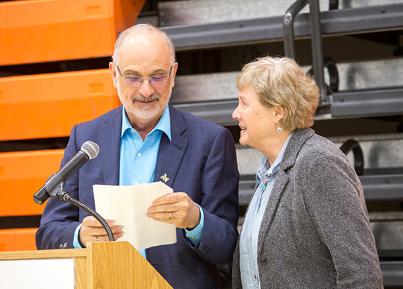 While employed at the college Harris served on the Learning Management System’s sub-committee and was nominated for a Rustler Salute award along with the committee, for their hard work for choosing a new system.

Harris retired this May after almost 18 years with the college.