CWC Alumna Goes on to Excel at Johns Hopkins Hospital

At 17-years-old, as her high school sweetheart battled leukemia, Naomi Cross developed a passion for the nursing field. Through countless appointments and tireless caregiving, Cross’ admiration for the nurses and their work grew.

“They treated me like I was part of the care team and I wanted to be just like them," Cross said. "When Michael died, I vowed to become a nurse at the Johns Hopkins Hospital.”

Living up to her vow, Cross began her nursing journey at the University of Maryland and Baltimore County. She was working full-time, attending school and had recently become a mom. Her passion and eagerness for success drove her, but the commute to work and school while fulfilling roles in her family-life proved difficult. Her father-in-law was the first to suggest Central Wyoming College.

At first, Cross was unsure about CWC. Growing up in a military family, she moved a lot but spent most of her time in Maryland and Germany-- nowhere near central Wyoming. Further, a 1,900-mile move seemed excessive, especially given the mass of nursing schools within a commutable distance of her home in Maryland.

Cross' boss lit up when she mentioned CWC and encouraged her to attend. Her boss told her that CWC was known to have a great nursing program with an amazing pass rate on the NCLEX.

"I was astonished," Cross said. Cross' boss was familiar with the program because her cousin was a doctor at Lander Valley Hospital and raved about the nurses that came from CWC.

“I remember calling the CWC School of Nursing as a prospective student and Stacey was amazing. She was kind and caring and she took the time to answer all my questions," Cross said. "This was key for me because I called many other schools who sent me to answering services and sent emails, but no one responded so quickly with invaluable one-on-one attention.”

Cross made the move in 2004 and graduated from CWC’s nursing program in 2008. In her time at CWC, she found the expertise and firsthand instruction of her professors indispensable.

“I remember learning that I had to completely commit to my nursing education and all of the staff at CWC were so supportive and encouraging. Nursing school was so tough and at times so exhausting, but those incredible women encouraged me every step of the way and I feel that I can never truly repay them,” Cross said. 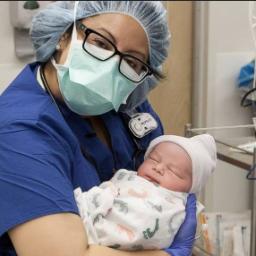 “It has been so fulfilling to be a role model for minority students to help attain their dreams of being nurses,” Cross said.

During the whirlwind with the American Nurse Project, Cross continued her education and received her bachelor’s and master’s degree in Nursing Education from Notre Dame of Maryland University. She is currently pursuing her Ph.D.

For now, Cross is the senior clinical nurse coordinator for the Johns Hopkins Cystic Fibrosis program and is currently teaching maternal child health and caring science full-time at the School of Nursing Notre Dame of Maryland University; a long-standing goal in her life.

Naomi Cross followed her passions toward nursing school in 2004. Through hard work and dedication at CWC, she was able to build the foundations to achieve her greatest goals.